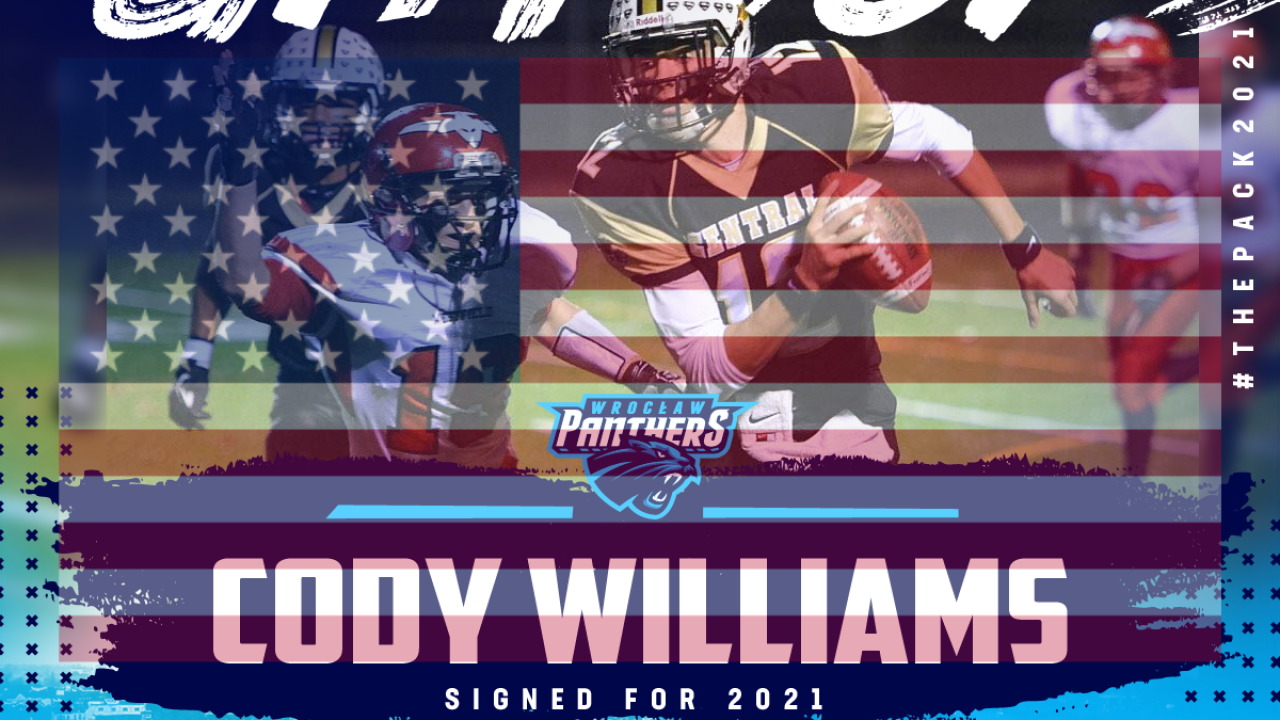 Can't stop, won't stop! We'd like to introduce you the athlete to lead Panthers in 2021! The Quarterback that is going to help us in the battle for ELF championship is Cody Williams!

I signed with Wroclaw because of their continued success. They have a great organization from the players to the coaching/upper management. As well as moving into the ELF, This is the premier league of European football an I’m super grateful for the opportunity I have to play with these guys in the league’s first season.

How and by whom were you introduced to Football?

Football started for me back when I was 7 years old. My dad played his whole life so there was a slight influence but the natural love I had for this game was going to show up on a football field eventually. Watching dad play ball was like having real life superhero in front your eyes. It made my brother and I want to do everything just like him.

Your serious career started at the university.

I started my collegiate career at Monmouth university in west long branch New Jersey. Started as a redshirt freshman an a redshirt sophomore. I wound up transferring two years later to Assumption College after a leg injury and coaching change. Rehab went great and we made a run at the National tournament with arguably the greatest team I’ve ever played for in my 17 years of football. We wound up losing in the Elite 8 game but it was a hell of ride, shout out to my guy Chesney if he sees this. He gave me an opportunity to come an compete and that was all I ever needed.

Every kid who plays ball dreams of playing at the next level (NFL). U-mass gave me an opportunity to participate in their schools ProDay. I got to showcase myself in front of some scouts. Unfortunately I didn’t wind up getting invited to camp. My QB coach Tommy Guy after his collegiate career played with Kiel in Germany. So I made a profile on Euro players and got on the first plane out to Potsdam. Met an awesome group of guys who truly love the game. But Germany was an opportunity to continue to play ball and I was forever grateful for the chance to meet an play with those guys.

What are your memories on you beginnings in the new culture, away from home?

First time being in Europe was different but I embraced the culture with open arms. From trying to learn the language, buying groceries an taking public transportation it was all a brand new experience and I loved it. Made some relationships with people that last till this day. Can’t wait to indulge into a brand new culture !

After the 2019 season you went back to the US and played in the National Arena League. How was it?

I went through training camp and the first exhibition game then I was called back to the states from my agent at the time to work out of Winnipeg. After the workout he advised me to stay local if they decided to bring me into camp so he got me linked with an Arena team in the NAL (Brooklyn Streets). Playing arena ball is different than regular football. Due to the smaller field there is only 8 guys on each side of the ball an with the smaller field the game is so much faster, windows are tighter. What I did pick up from the game was the ability to improvise a little better, there’s a lot of re-routing/ an funky routes that were different in arena than outdoor ball. Very cool experience!

You were meant to play for the Carolina Cobras in NAL, but the league was cancelled due to COVID-19 situation. What have you been doing during the pandemic?

The next arena season was cancelled due to Covid which is why I didn’t wind up playing in Carolina. An I have a business degree so I got a small sales job in the meantime while trying to find another football home.

I stumbled upon an information you have been a part of the project on rebuilding your hometown Springfield.

Rebuilding Springfield is a community outreach project where we went to homes of people in the city and fixed their houses an properties! Feels great to give back an help the community an city where I was raised !

How do you spend your time when not practicing?

I’m a big family guy an I have a bunch of cousins an Siblings who I’m always around. I also have 3 awesome dogs (Choco, Phoebe and D’Bo) and we love playing Call of duty on the game systems.

What is American Football for you?

American football is everything to me, it’s the only thing that’s been consistent in my life for the past 16 years. This sport gives you family friends and life lessons that you will use an teach to generations later in life. Football has made me who I am today !

What is the biggest strength of Cody Williams – The Quarterback?

My strong point as a football player is my ability to command an offense, I get the best to come out of my teammates because they know I will give my all for them. This sport is about sacrificing for the other 10 men on the field with you. I’ll always give my all for my brothers on the field!

What can the team and fans expect from you?

The team and fans can expect a leader and a ultimate competitor. I hate losing more than I love winning. Super excited to meet everyone and indulge in a new culture! Go Panthers!

Every time I ask the players for their season goals the response is simple “National Championship!”. This time, the team will not participate in the national league but European League of Football, so the goal is not that simple. So, what is your goal with Wroclaw Panthers?

I’m super excited to get back on the field and to have the opportunity to do it on the premiere league level with the best guys in Europe ! The ultimate goal is to be the last team standing. We want to be playing in The ELF bowl!!